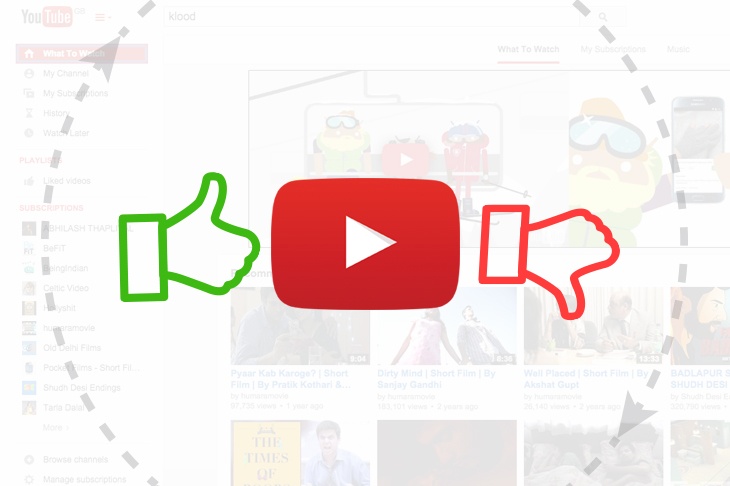 There’s no denying that YouTube is one of the most popular sites on the web, with over one billion total users who return in their masses every day to catch up on their favourite video content. In fact, it’s estimated that around 300 hours of footage is uploaded each minute to the platform. Unfortunately, for digital marketers, this means getting your content seen can be quite the task. Much like parent company Google, the exact algorithms that decide if a video should rank higher or lower on YouTube under lock and key . This doesn’t mean we know absolutely nothing about Youtube SEO, but it has led to a few sensationalists and bad sports throwing out some misleading and downright untrue theories into the mix. Therefore I’m going to debunk the top five YouTube SEO myths to help you improve your channel’s rankings.

‘The more thumbs up you have the better’

Possibly the most flawed of the theories I’ve come across. We’ve all seen and heard it, ‘make sure you give this video a thumbs up!’ in the ending sequence of a video. However, YouTube isn’t all that fussed when it comes to these indicators, they are actually designed to act a feedback for the content creators themselves. Of course users can always leave a comment, but those of us who are all about procrastinating (aka watching cat videos) aren’t going to want to post ‘N’awwr cute’ on all 20 videos we’ve hopped between that day. Still not so sure? Look at it logically, we all know there are some dodgy like/follower farms out there for Facebook and Twitter where users can pay to have unengaged fake accounts to follow them and YouTube is no exception. If the thumb indicators did influence YouTube’s algorithms they’d be far too easy to exploit, and frankly, from a platform that’s owned by Google, I think we’d all expect something a little more complex.

Another misconception is that YouTube determines popular content by superficial user actions, such as a video that gets added to a user’s favourites or playlist. The idea is that if a video that’s been added to more favourites or playlists, it will perform better than those that haven’t’t. Again, this is a user targeted feature, which is included for the benefit of the account holder, not for SEO purposes. If this was the case, we could buy those aforementioned fake users to create hundreds of playlists that feature just our own content, which no real accounts would see. That’s not to say that if your video gets favourited or added to a playlist of another user that nothing will happen. If you’re lucky, and the user is another content creator with a big following, you might start to see organic traffic stream into your channel via theirs. But just to be clear, that influx of traffic will not be because YouTube algorithms favoured your content over content which wasn't featured in a playlist of some sort.

‘If my video is embedded and shared more, Youtube will rank it higher’

Unfortunately, the number of times your video is embedded or shared does not count towards your rankings. Generally, when I tell people this who are SEO savvy, I’m matched with a response of ‘even if the site has a really high domain authority!?’, and the answer is always the same. A lot of people presume that Google took their algorithms and ‘tweaked them slightly’ for YouTube, but this couldn’t be further from the truth. YouTube doesn't care who’s doing what to help promote a video, they care about what a user does when they see the video (but more on this in my next blog!). In fact, with all of these myths it’s always wise to think, how easy is this method to exploit? Chances are, if you could buy someone to do the action for you, it’s not going to be favoured by YouTube’s algorithms.

The final, and probably the biggest of the YouTube SEO myths making the rounds online, is that YouTube favours videos which have keywords saved in their filenames. A while back, when YouTube was making changes to its algorithms, this was falsely reported and thus the rumor mill went into overdrive. The general theory is, as the filename is the first thing YouTube learns about your video, it therefore prioritises this piece of information ahead of any other details you give, such as a description or tag. However this simply isn’t true. In fact, the filename is the very last resort for YouTube in terms of trying to find out information about your video. Ever stumbled upon that part of YouTube where all the related videos are named something like ‘193984.Mov’? Generally, this is where somebody has uploaded the video to the site and failed to change the suggested title, or in fact, fill in anything at all in the description box. Which leaves YouTube scraping the barrel to find some relevant key terms.

To conclude, when it comes to YouTube SEO don’t believe everything you hear and be sure to question new rumours that come out of the cracks. Ultimately, things like percentage of a video watched, and the amount of users who return to your channel are the types of stats you should be paying attention too. If you’re ever uncertain, always ask yourself - could this algorithm be manipulated to cheat the system? If the answer is yes, chances are you needn’t worry yourself with it. In my next blog I’ll be running through what YouTube’s algorithms are looking for, along with my top tips. Until then, do leave me a comment below with your YouTube SEO queries.